Skip to content
Most sneaker enthusiasts know Outsole. That is a great compliment for us. We have the largest selection of Nike Air Max1 worldwide. That means that we have thousands of online visitors to our website every day. We often explain that Outsole is more of an online sneaker museum than a webshop for many. For us, working with sneakers is a hobby that got out of hand. We ourselves do not see Outsole as a serious company, but as a place to enjoy our passion. But how did Outsole actually come about? I, Frabjm describe that in this blog.
We’ve all always had a love for sneakers. From 2005 I unconsciously started collecting sneakers. Sneakers became a hobby, a passion. Through the local social medium Apeldoorner.nl I came into contact with others with the same passion. This is where I found out that there was such a thing as “collecting sneakers”. Collecting sneakers was still relatively underground. Internationally, there were a few forums you could read about it. Within the Netherlands there was the popular medium Lacebag at the time. This was a source of information for me. Like any starting collector, I wanted to know more and more about sneakers.
One of my first pairs. The Nike Air Max 1 Teal, photographed by Lacebag. 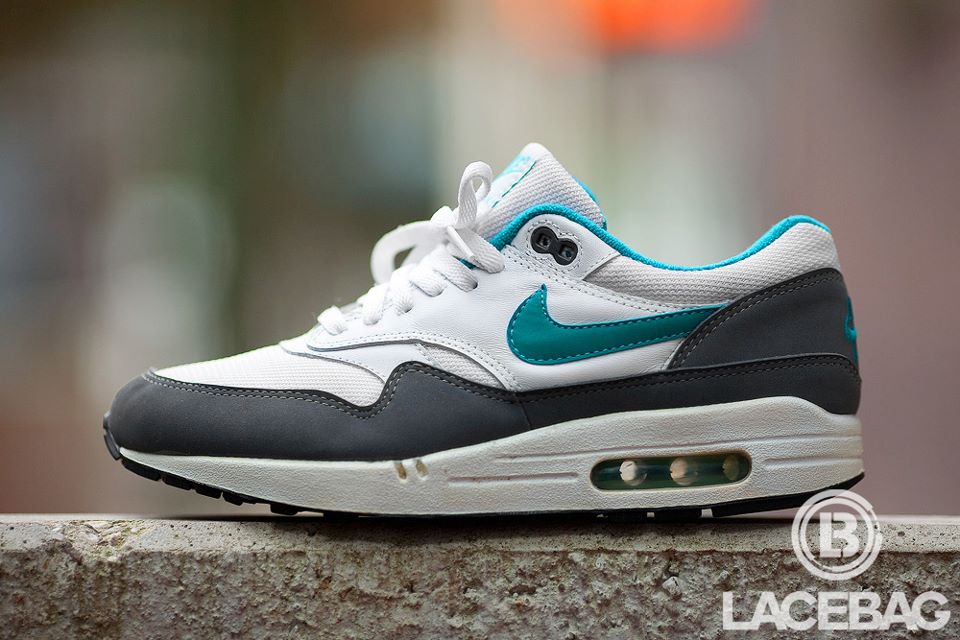 I didn’t stop there, I wanted to experience it myself. So I started with a very varied collection. My first Nike Air Max was the Nike Air Max 90 Red Safari. They were damn good. Just another Air Max to try, now an Air Max 1. The Nike Air Max 1 Polkadot followed. This was the magical moment for me. I fell in love. All I wanted was Nike Air Max.
I think the Overkill Studio ID in a Concord colorway is the dopest AM1 pair. Yes, I’m in love with this model.

That was easy. Sneakers were not mainstream, the demand for sneakers was low. Via Marktplaats and eBay you could easily buy Nike Air Max for a few tenners. For example, I bought a Nike Air Max 90 HOA Infrared for €50 and later a Nike Air Max 1 Premium Hufquake new in box for €80. That was still doable with pocket money and a part-time job as a shelf filler. Only a few sneakers sold for above retail. A Nike Air Max 1 Supreme Atmos Animal and Elephant went for €180. With the exception of Hyperstrikes, the Amsterdam and BRS Powerwall were the most expensive Nike Air Max sneakers with a value of approximately €300.
In 2009 I had all Powerwall 90s and 1s complete. 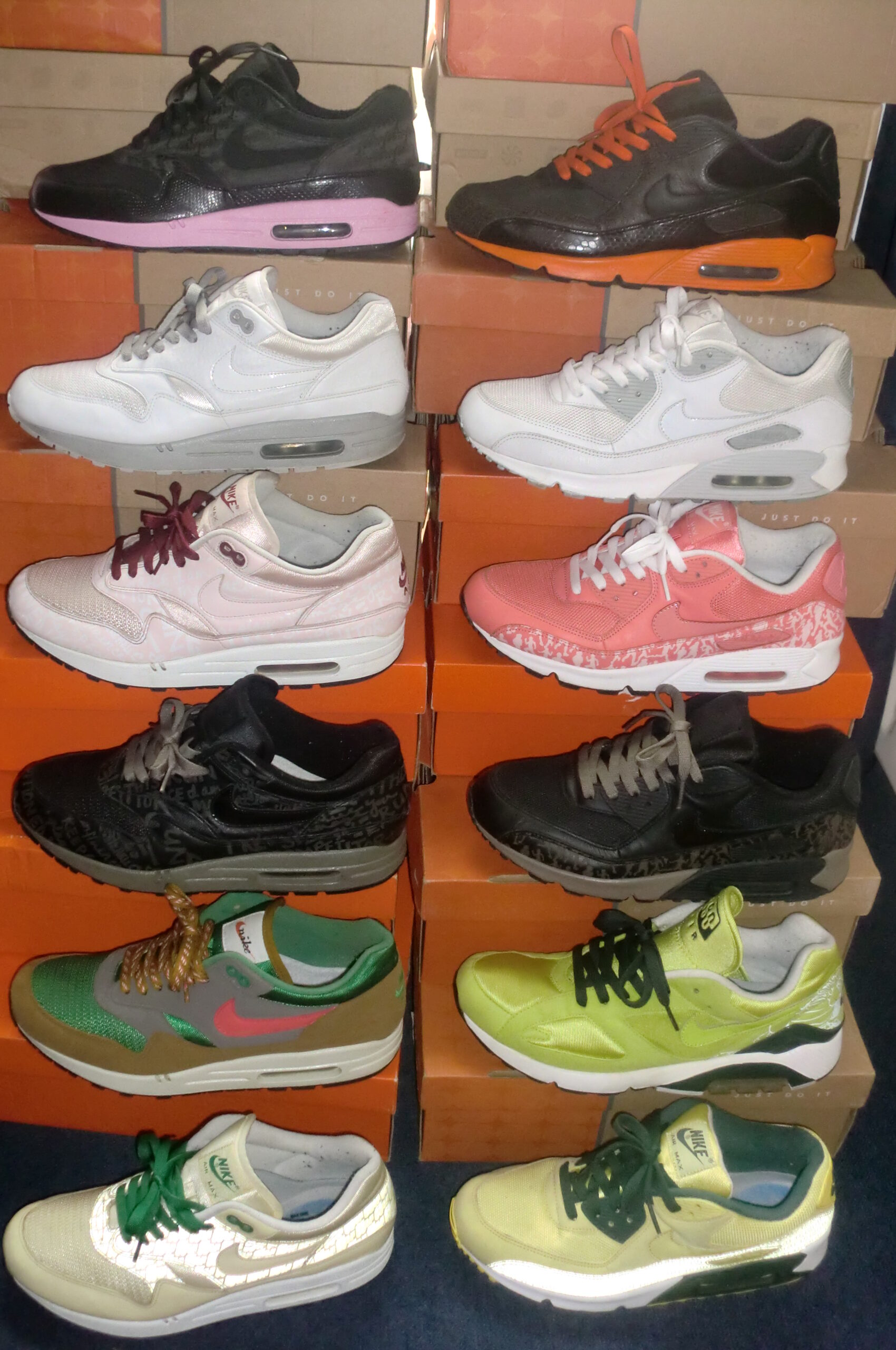 I wanted to expand my collection. That was the dream. All Powerwalls, all Atmos releases, all OGs. I added the Patta pack to the wishlist in 2009. I couldn’t afford that. There was only one solution: sell sneakers that were unnecessary for your collection. Soon I sold about everything that wasn’t Nike Air Max. The Dutch Marktplaats, with all due respect, was not as terrible as it is now. Selling was easy and I often connected with buyers with fun talks. In fact, I liked selling!
Immediately after release I had all Patta Nike Air Max 1s. Crazy! 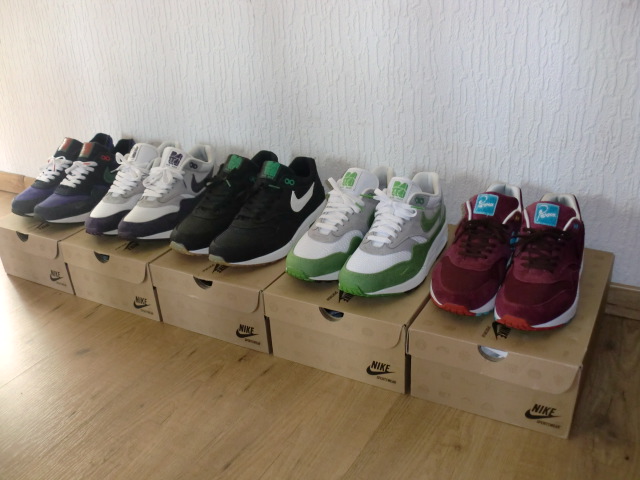 Meanwhile, sneakers became more and more mainstream. Social media has had a major influence. Hyves (Dutch) became extremely popular. One of these Hyves communities was the Nike Air Max 1 group. Here I met Bas. A sneaker fanatic with a similar story, but living on the other side of the country. We built an online friendship. I also had contact with other enthusiasts. Other sneaker fanatics came into contact with sneaker communities much faster. These communities grew. Much larger than local forums or Lacebag were. Selling and buying became even more fun. When I think back to how I traveled across the country as a kid, ended up at people’s homes with way too expensive sneakers, made quick deals from a car boot, paid cash money at the station… That’s no longer possible. Today that would be considered dangerous.
Car boot sale, arranged at a station in any city. Payment was often made in cash at the time. 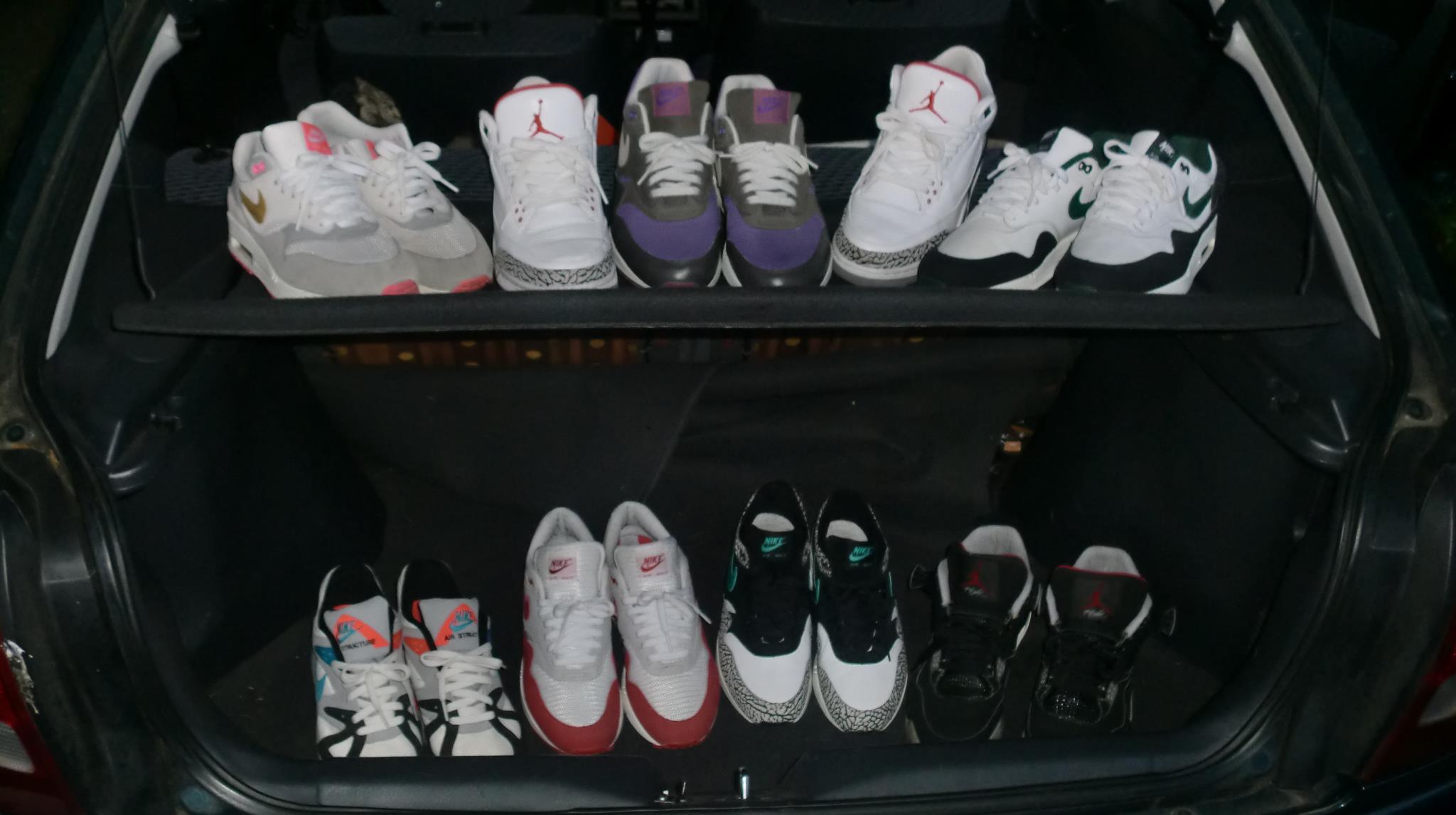 The big bang of sneakers going mainstream coincided with the rise of Facebook. Even the housewives left Hyves for Facebook. What was the big difference? International. Large international communities emerged and that was unprecedented. The Nike Air Max was much harder to get in those countries. The demand for sneakers increased enormously, so did the value of the sneakers. Prices went up two, three, four times.
A sneaker fair back in the days to thin out the collection. Nowadays we have 600 pairs of sneakers with us. 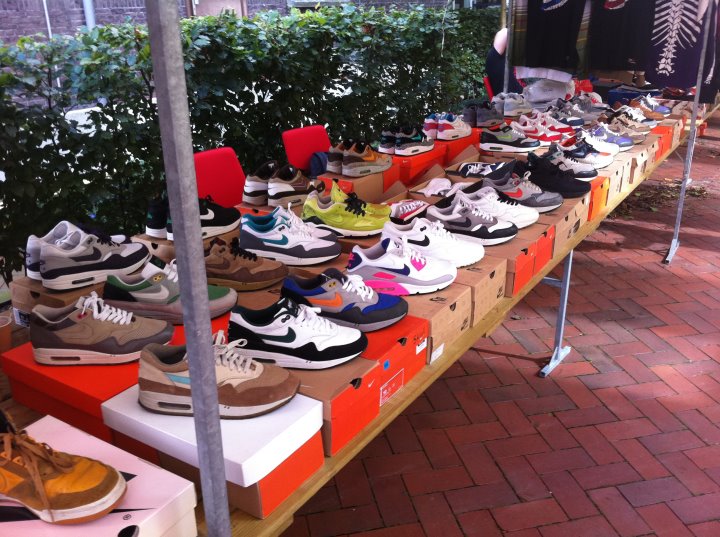 I had to take my advantage of this. This was the time to get a good price for my sneakers and expand my collection enormously. I liked selling and I already had a good network. However, selling via Marktplaats or social media had a major disadvantage: your advertisements disappeared again. That’s why I started a Blogspot, where I could post all my sneakers and only have to remove ads when I had sold the sneakers. “Frankossale” was born.
A random selection of couples that ended up on the Frankosse blogspot at the time.

This hit much harder than I could have imagined. I sold insane many pairs of Nike Air Max 1s and immediately bought new ones or traded them in. My collection grew into one of the largest in the Netherlands. More than 1000 pairs. All previously holy grails I had double, sometimes triple. Great, but also the end of my collecting passion. There were few Nike Air Max 1s I hadn’t already owned. What now?
I have had almost all Air Max 1s in my hands. There are so many colorways to collect. 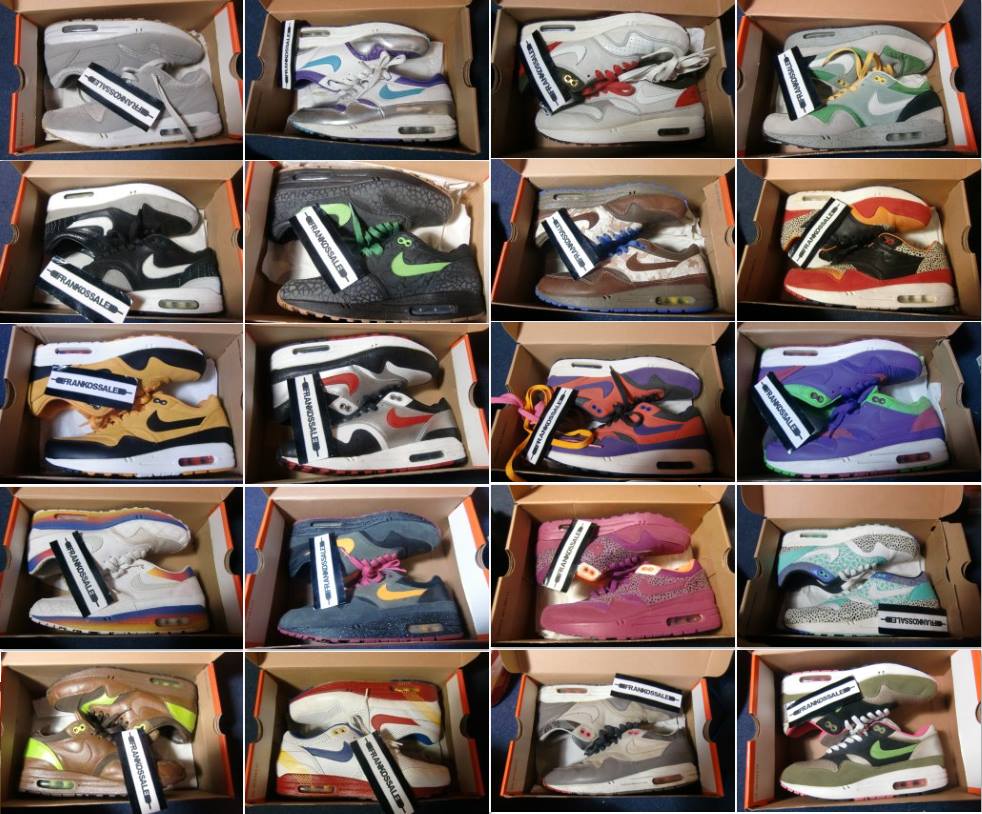 By now I had gained a lot of experience with buying and selling sneakers. This became a new hobby. However, the goal was always to expand my collection. But could I also earn some money and build a customer base? A new dream was born: a webshop for the most exclusive sneakers. This new dream was a big challenge. How do you get an online store? How do taxes work? Where do you rent storage? How do you run a business? I wanted everything to be professionally arranged down to the last detail. I chose to think everything through carefully before taking action. Study first, then realize.
Sneakers that I absolutely did not let go. You can see it from the box colors, this was quite a while ago.

The realization mainly consisted of “just do it”. Buying a webshop was too expensive. I started figuring out how to build a webshop myself. I consulted the Chamber of Commerce for all the ins and outs of the collection market. Every night I read books about taxes, SEO, international business. Finally, I was working on a master’s degree in Business Administration. Here I learned everything about strategy, marketing and finance. These were my ingredients to start an official webshop.
We often went out to shoot a WOMFT. Love ’em, such a screamer. 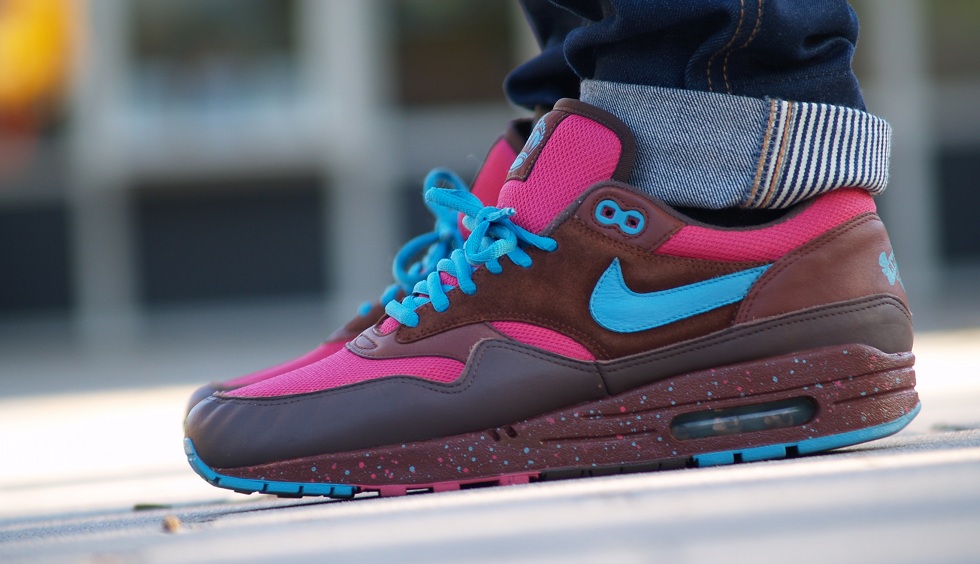 I have always maintained a bromance friendship with Bas. Bas was facing the same tipping point as I was. We wanted to work together, but running a company together was still a bridge too far. Bas was also still studying. We came to a construction where he could offer sneakers through Outsole through his own company. Together we fill in the marketing. The perfect formula for turning your hobby into your job.
No sneakers were harmed in the making of this picture. 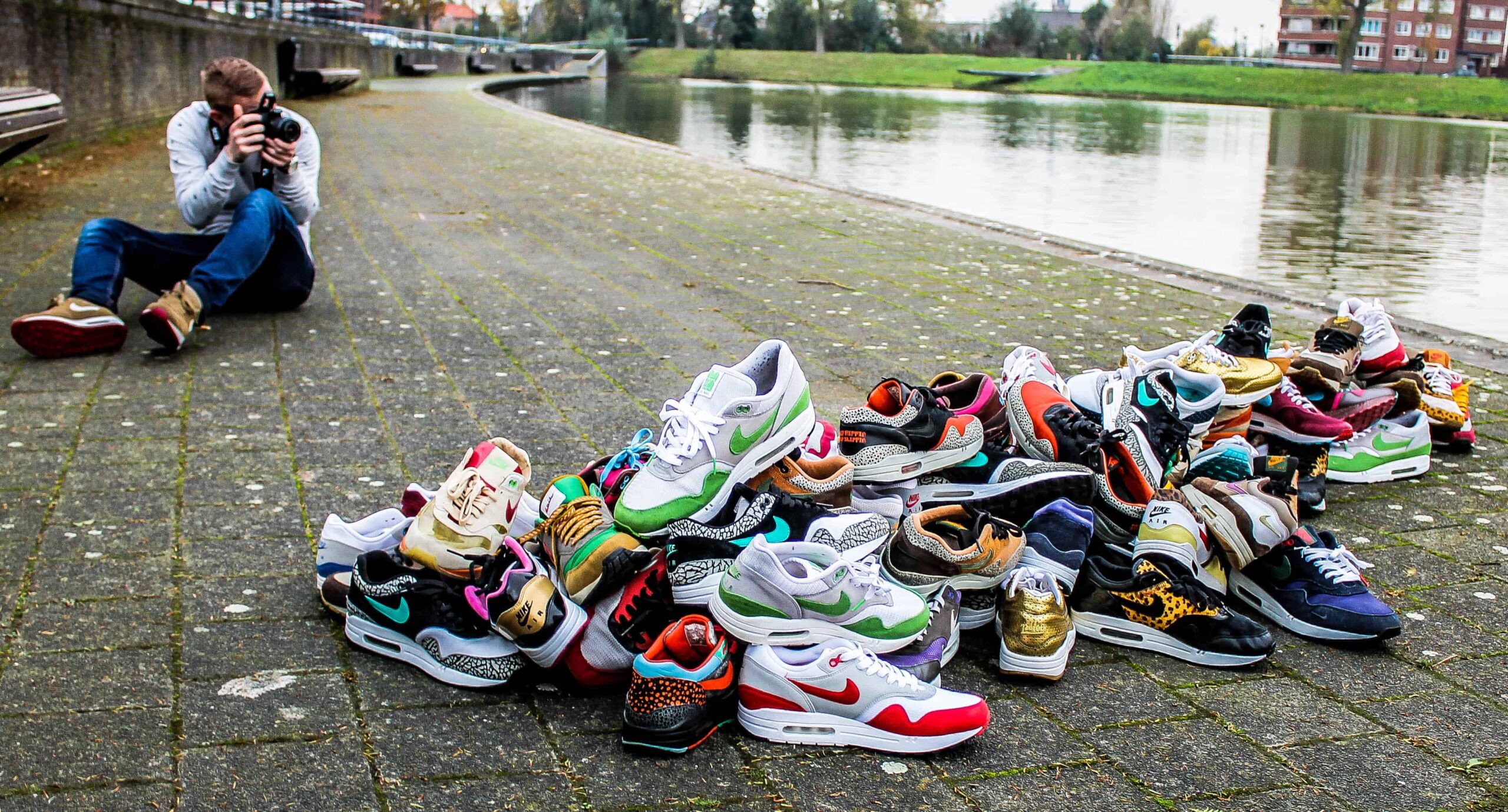 Now there was one more big challenge. How do you make a decent webshop without IT knowledge? This is where our hero Dennis, aka Frits, came in. I met Frits at Sneakerness Amsterdam in 2014. We got talking and came up with the subject of starting a webshop. I showed him my first setup and he hated it. Lovely! Frits turned out to have a little more knowledge of web design than I did… Unfortunately I wasn’t able to do any better: “So Fritsie, if you know it all so well, do it yourself then”. By the way: did you know that we never call Dennis ‘Dennis’, but Frits? Today only his parents remain to call him Dennis. You’re welcome, Frits!
My office at the time. With this photo we announced the launch of Outsole. 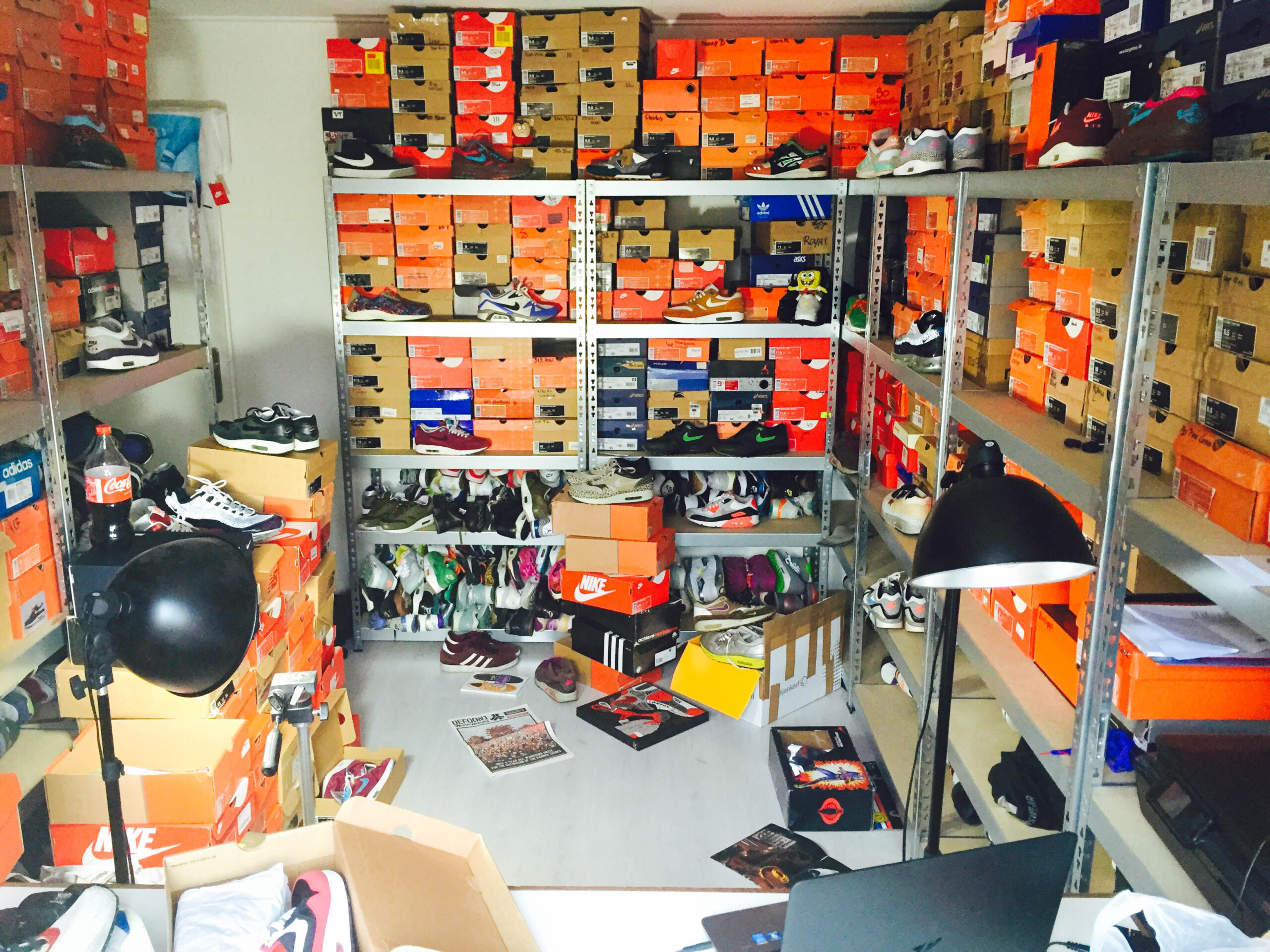 You guessed it, Frits became our visual designer. Together we built Outsole and he taught me the tricks of web design. The online shop was ready. Now products. We started with over 300 sneakers and chose a moment to go live: 01-10-2015. We devised a marketing plan to promote Outsole and go live with a big bang. And off we went… Outsole became an official webshop for second-hand collectible sneakers!
Our first event with Outsole. Meet Dennis Wegereef, Frank Klerks and Bas Honders. 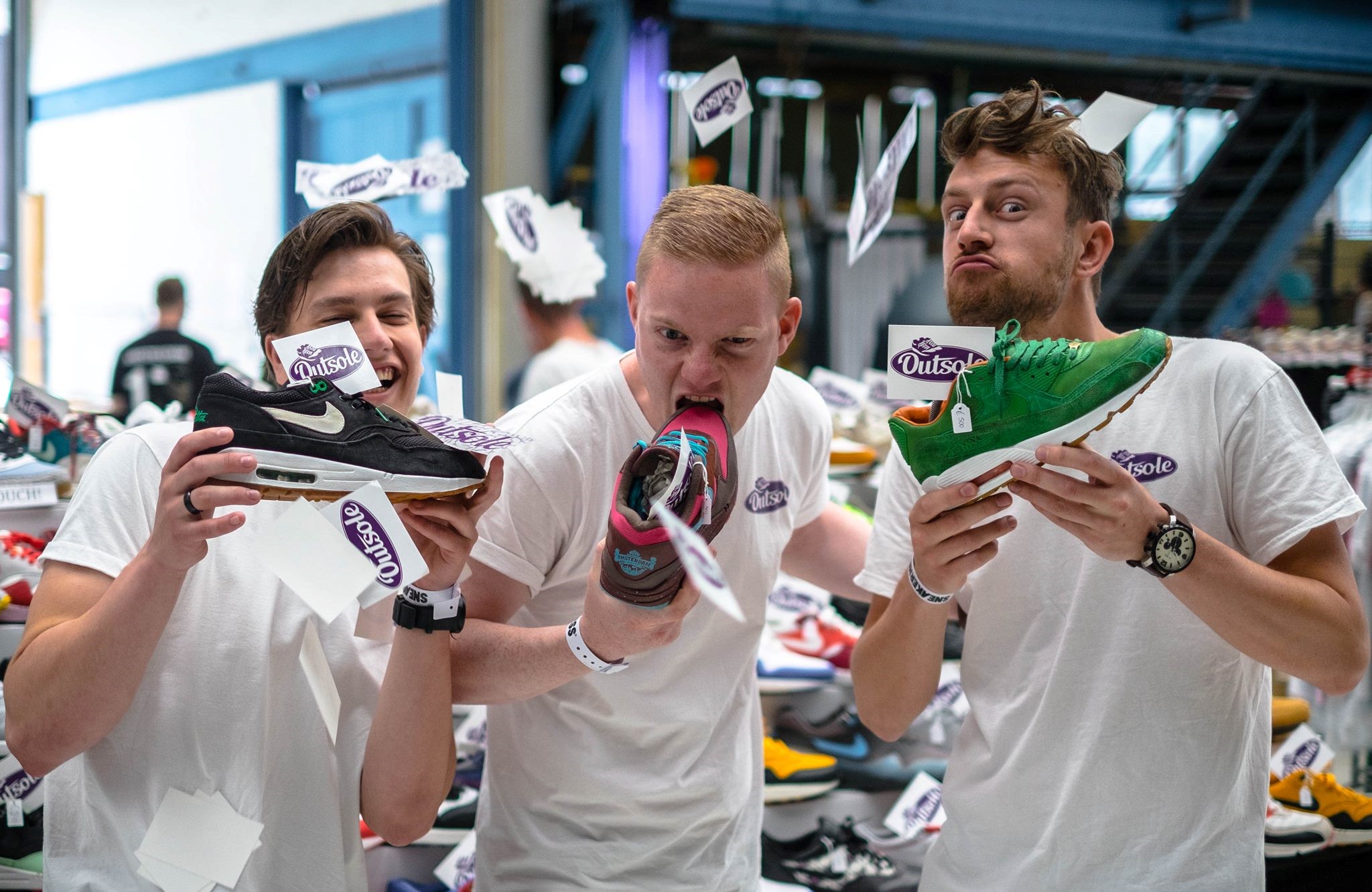 At this launch, our dream became reality. We pushed boundaries. On all levels. Sell more, buy more, more products. We expanded our online collection and have always had more than 2000 sneakers online. We now work in our own office building. We have a great Outsole team helping us with events. Been asked to participate in dozens of magazines, newspapers, radio and TV programs. Your own Videoland episode. Article with photos in Playboy (hell yes!). As a sneaker specialist in RTL Boulevard. While it all still feels like exactly the same attic room hobby as before. What else do you want? With ten thousands of satisfied customers, we really don’t have much more to wish for. Except that we may enjoy this dream for a long time to come.
We celebrated our fifth anniversary with this limited edition T-shirt. 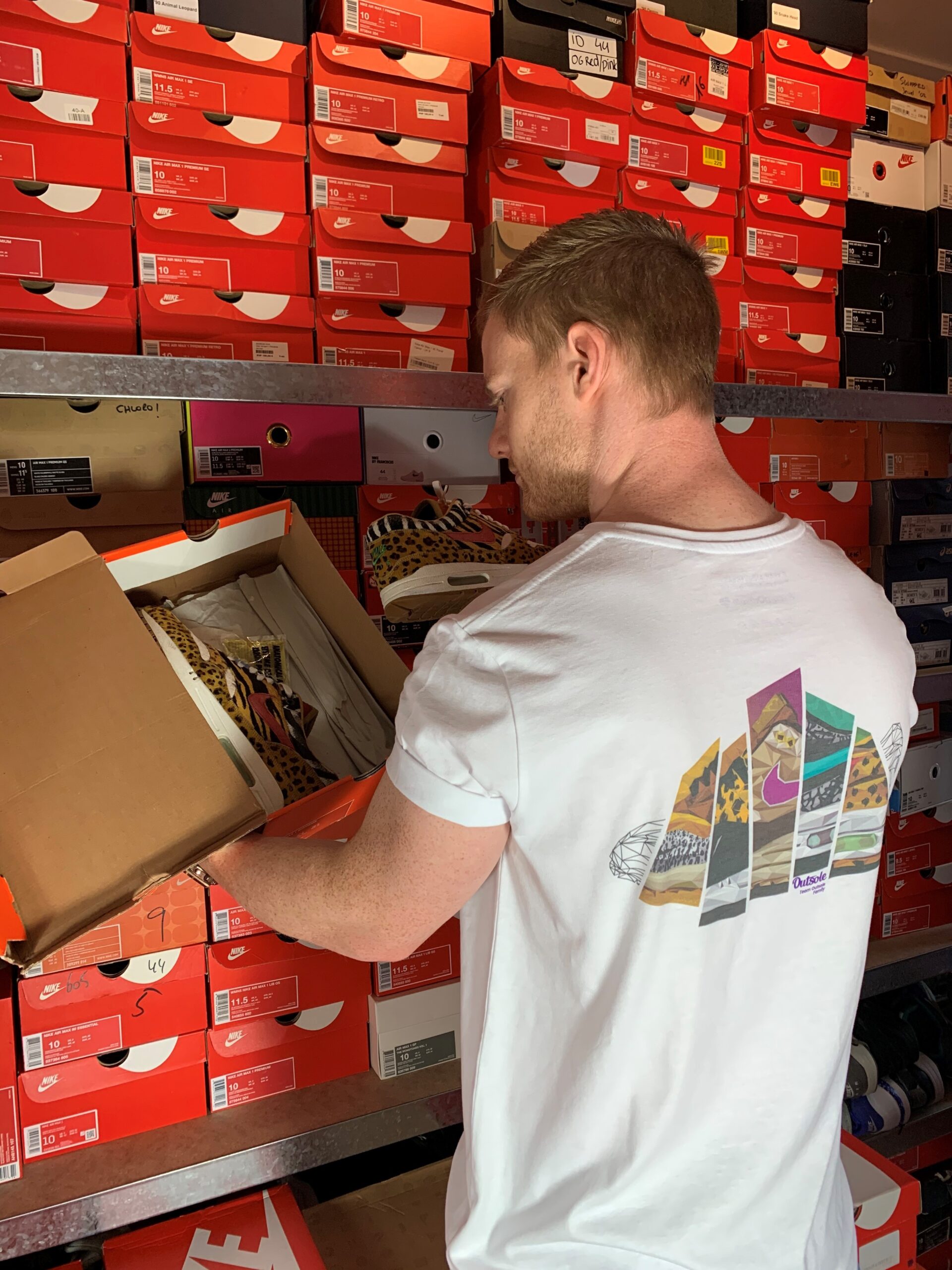 Thanks for all the love <3
Nowadays we attend to events with 600 pairs of Air Max 1s. Moving all the pairs is terrible, but this is the place to stay in physical contact with the community. 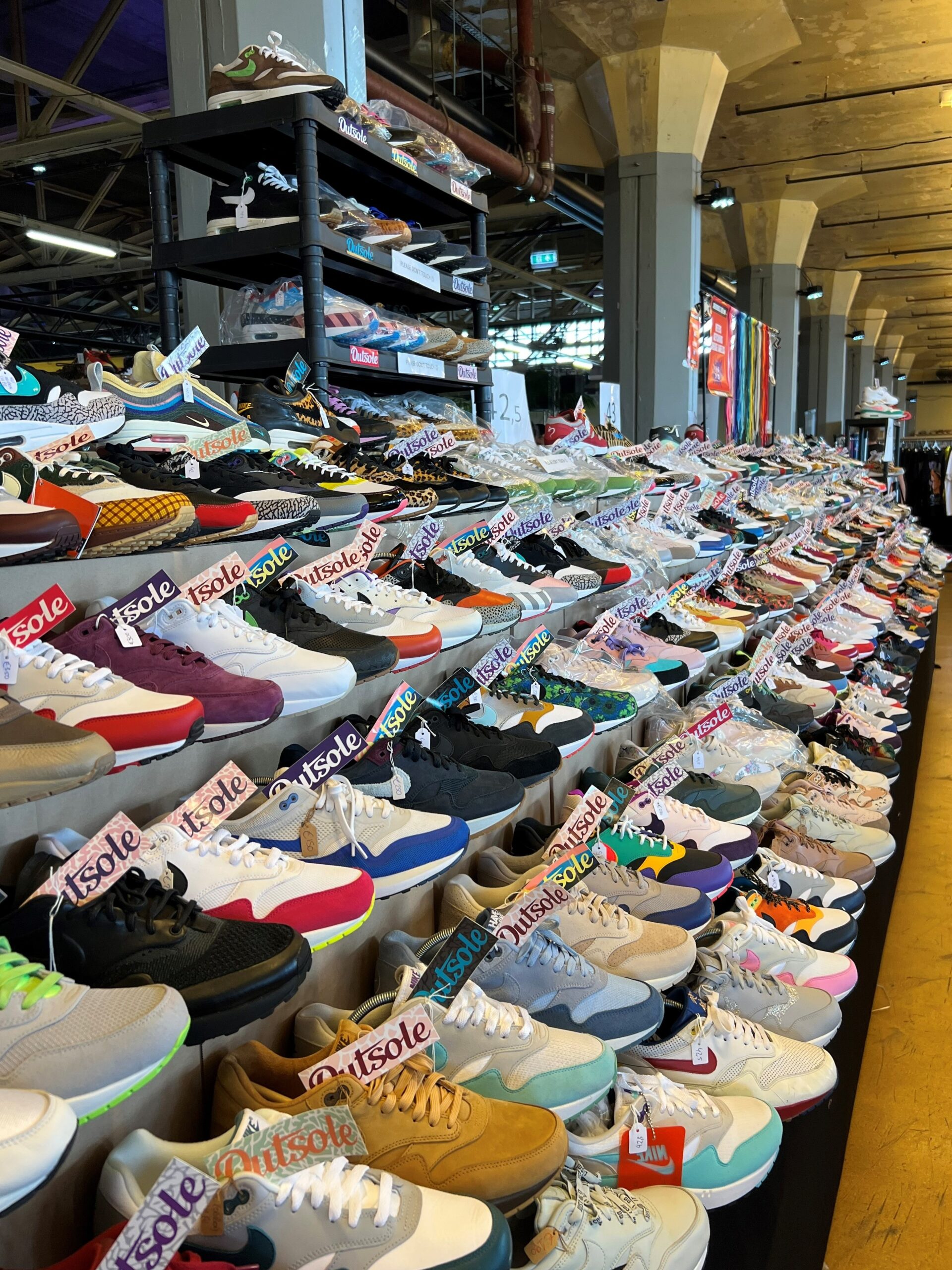 We use cookies on our website to give you the most relevant experience by remembering your preferences and repeat visits. By clicking “Accept all”, you consent to the use of all the cookies. However, you may visit "Cookie settings" to provide a controlled consent.
Cookie settingsAccept all
Manage consent